I had the pleasure of returning to Mass at my parish this past weekend, after a hiatus following the birth of my daughter.  This being my first time leaving my daughter for more than five minutes, my husband and I left for Mass with about six minutes to spare.  As you may be anticipating, we arrived late, and not only were noticed by Father as we sheepishly appeared during the Kyrie (sorry!), but had no choice but to take the walk of shame to the only empty pews in the house: the front row, of course.

As we settled in for the first reading, my energies quickly shifted from Catholic guilt at being late for Mass to the wondrous decorative display upon the altar. We have had pumpkins and gourds on the altar platform since early October (and I smiled 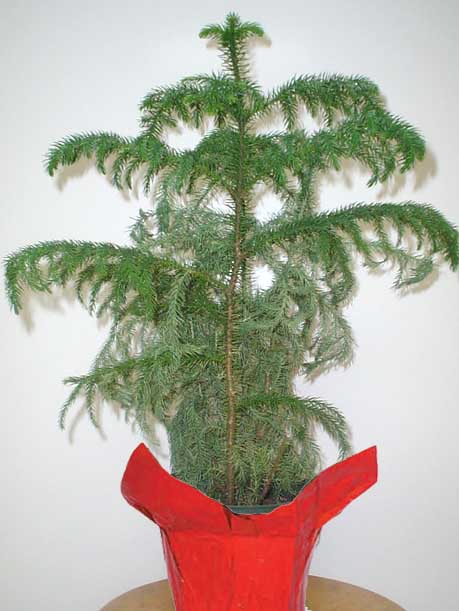 to read Lizette Larson’s piece on this subject).  But now, our pumpkins were joined by glistening Norfolk pines in bright red pots: bright red pots because the snowflake pattern showed up more clearly against them…and glistening because the pines had just a touch of glitter!  As I surveyed the scene more closely, I noticed that we not only had the pines, but two straggler palm trees (Ordinary Time leftovers) nestled amidst the greenery behind the altar.  My liturgical arts and environment brain started exploding.

Now, let me first say that I love our parish and our parishioners.  It is truly a special place, full of wonderful people.  In fact, as I write this, one of my parish friends is picking up some groceries for me while I watch my baby struggle through “tummy time”!  Sometimes, though, strange things happen…like pumpkins and pine trees and palms…all in the same weekend.  Is there a saying about “loving the liturgists and hating the liturgical faux pas”?

Perhaps instead of simply judging, I should ask: is it even a problem that we have this mishmash of secular plant life in our worship space?  Our commercial world puts out Christmas decorations the day after Halloween (or earlier, if you’re in the craft store), and palm trees are a fairly mainstream piece of office décor.  Furthermore, our worship space is modern (c. 1993), so, if we attempt to orient the space to the liturgical year or season, its clean whites and wood demand decoration with other, worldly objects.

However, in my parish’s case of pumpkins and palm trees and pines, there is something more deeply at play than (odd) liturgical choices.  At the heart of the matter, I believe, lies the role and function of liturgical symbols.  In sacred

spaces which have fixed liturgical art and which contain objects which are not oriented to a specific time, it is perhaps less necessary (or persons are less compelled) to complement said spaces with objects which reflect a specific season.  But, a space such as ours offers a blank canvas for interpretation.

If we were to “decorate” for the season, It might be more “liturgical,” as the liturgical pioneers of the mid-twentieth century would have said, to focus on the specific readings of the Sunday, or at least the appropriate season of the liturgical year.  Such liturgical movement advocates might have hu ng banners in solid colors, perhaps adorned with strong liturgical symbols (alpha and omega, or grain and grapes, etc.).  Still other liturgists might have argued that the space should remain exactly what it was designed to be: with clean whites and wood allowing the Word and Sacrament to echo through the People of God…unhindered by the potted plant life of the world.

I may not have good solutions, but, in the meantime, I’ll work on not judging, but giving thanks and finding joy in our own parish’s creativity as we negotiate the twining seasons of liturgical year and a misty Mid-western November.  And, in the meantime, a Merry Pumpkin Pine and Palm Tree to you!