In an interview with an Italian magazine (see also here), which is staffed by writers and editors who are homeless or otherwise socially excluded, Pope Francis says that in thinking about almsgiving we should not think. At least we should not worry about what the money will be used for.

The pope says that far too often such “concerns” about using the money for drinking or drugging—we might also include the “vast conspiracy of panhandlers” argument—are evidence not of real concern but of patronizing self-concern. He asks those who justify not giving to beggars, “What do you do on the sly?” In other words, do I tell myself that because I “have my act together,” I am justified in having a drink, splurging on a meal, or going on a vacation to the beach? He also points out that in suburban, white-collar neighborhoods, the same malaise of drug-addiction or alcoholism occurs, bur under the surface.

It is interesting that the first three comments on the reporting of the pope’s interview over at America are all reactionary, implying that the pope is economically or socially naïve. It strikes me that the pope’s comments are not some economic calculus (see also this), but rather manifest a liturgical logic of gift and compassion. I give as a return gift to God because God has given to me even as I continue to fail. 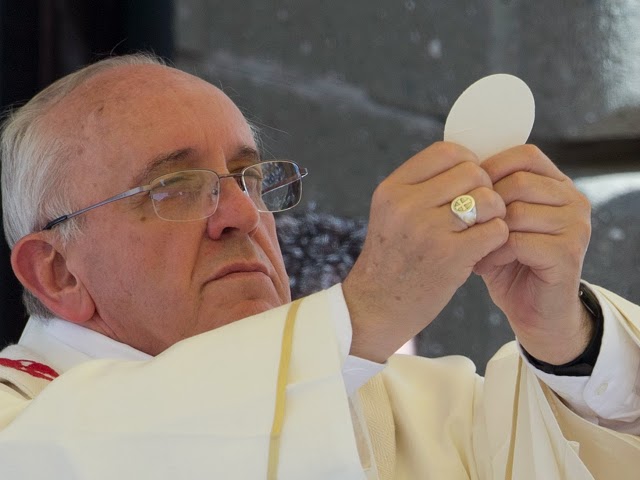 Which of us is worthy of receiving Eucharistic grace? Of course we should be free of mortal sin upon approaching the altar, but which of us does not have the proclivity to squander God’s gifts after we participate in the sacraments? Yet, God continues to give.

It strikes me that Pope Francis’s fervorino about almsgiving is not unconnected to the suggestion in Amoris Laetitia (footnote 351) that pastoral discernment should govern the reception of communion by the divorced and remarried. Of course, that footnote earned the pope a loud-but-small minority formal objection, which he has wisely ignored. In both cases, Pope Francis suggests that a checklist of worthiness—especially when its makes just too much sense—can be evidence of a hardness of heart. Reflecting upon his time in Argentina, in which he interacted with a homeless family regularly who was near the chancery, he said, “Someone told me, ‘They’re making the chancery filthy,’ Well, the filth is within.” Once again, the abundance of God’s gifts cannot be measured by our ability to live up to them. Just ask the older son in Luke 15. And the pope reminds us how easy it is to find the speck in my neighbor’s eye while ignoring the plank in my own. And while we’re making connections to Francis’s entire vision, it is not mere coincidence that in the same interview Pope Francis discussed questions about hosting refugees—another issue for which we have a penchant for mere cost-benefit analysis.

These words from Cardinal Wuerl on his official blog seem particularly applicable to the question and offer a nice Lenten reflection:

Pope Francis is challenging all of us to move into a far more Gospel-identified mode of living and being Church than we may have been comfortable with. We need to ask ourselves if perhaps the Church has not become too identified in the minds and hearts of many people with the politics and power struggles of the moment. Have we failed to persuade others of the significance of the Gospel message, so that they create the culture that reflects those values? Have we become too comfortable with announcing aspects of the Gospel but not necessarily witnessing its full demands?

Aside from the thinking about what this person might do with the money, on how might it reflect upon the Church to have the divorced and remarried receiving communion, on how a very small minority of immigrants and refugees commit crimes, Pope Francis drives us back to the gospel with the reminder that every encounter is an encounter with a person. And giving to beggars must be done “by looking them in the eyes and touching their hands.”