I distinctly recall, some twenty-five years ago, crouching on my parents’ living room floor, my arms slung over a blue velveteen armchair, sobbing.  My sobs, however, weren’t related to the more mundane matters of middle school drama.  “What if I can’t remember all the responses I’m supposed to make during Mass!?” I gasped between sniffles.

Twenty-five years ago this fall (1992 for those of you who are counting), I was among the first girls in my Roman Catholic gradeschool to be offered the opportunity to be trained as an altar server.  Our parish in southern Indiana, it turns out, had actually anticipated the formal recognition of girl altar servers, which came in April of 1994 from the Congregation for Divine Worship and the Discipline of the Sacraments, by two years.  The Archdiocese of Indianapolis formally welcomed girls as altar servers a few months after the CDWDS recognition with new norms for the Archdiocese.  Our parish’s 1992 training session joined us with a number of Roman Catholic parishes throughout the United States which had been allowing girls to serve since the mid-1980’s (following the 1983 Code of Canon Law, which did not expressly forbid girls from serving).

Now, my rather inauspicious beginning, replete with tears and self-doubt, might suggest that a boy (who would not have cried, of course) could have handled the pressure of becoming an altar server with more aplomb.  Yet, amidst all the other altar servers in my class, only I and one other boy remained a dedicated altar server through our senior year of high school.  And it was not the boy in my class who won the “server of the year” award in eighth grade!  Serving, for me, was more than a good way to gain “service points” for confirmation, get out of class during the day, or even make $5 for serving a funeral.  I loved being an altar server, and I kept doing it, because I loved…serving.

Serving at Mass was the first way I began to learn how to love the Church through my work.  It was also the first way in which I learned “liturgical style”—how to move without being obtrusive, how to adopt appropriate postures, and how to be attentive to (and solve) liturgical mishaps as they arose (e.g., a bad incense hand-off, or a missing cruet).  Being a server brought me inside the Mass, in a way I’d never experienced as a parishioner in the pews.  Altar serving was ministry, Martha-style—and I rejoiced in doing it.

Yet, as many of us have experienced, the phenomenon of girls taking on the role of “altar server” has been, and perhaps has increasingly become, a point of contention.  Even when Indianapolis’ Archbishop Daniel Buechlein first reflected positively upon girls becoming altar servers in the Archdiocese, he was careful to explain that “Servers represent the worshipping assembly at the altar in a role that is distinctive from that of ordained ministers” (“Seeking the Face of the Lord,” The Criterion, April 22, 1994).  There was, and has been, historic concern that allowing girls to be altar servers might become a slippery slope toward female ordination in the Roman Catholic tradition.

On this note, a friend sent me an article a couple of years ago on just this issue; a parish pastor in San Francisco, CA had recently released an “official statement” on banning girls from altar serving.  Unfortunately, the original article my friend sent is no longer to be found—but I happily discovered a favorite clip I’d excerpted.  The pastor wrote:

At the risk of generalizing, I suspect young men serving with young women might just distract them from the sacrifice of the Mass, and perhaps even from a priestly vocation.

Aside from simply being distracting, girls might prevent boys from serving 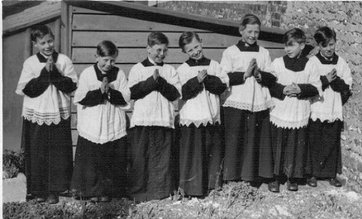 because “young boys don’t want to do things [like serving] with girls,” or, even worse, because girls are better at serving, they might “intimidate” the boys and prevent boys from serving at all!

When men are in charge of liturgy, they generally favor austerity, solemnity and reverence. They are far more likely to have ‘high’ liturgical sensibilities. When women claim a more central role, we frequently see a slide into lower and more culturally idiosyncratic practices. It generally starts with campy banners and popular-style hymnody, but may end with synthesizers and scantily-clad liturgical dancers. These liturgies are not beautiful or uplifting. They’re more like a never-ending hug from a grasping, obsequious aunt.

Now, I, too, have bad memories of felt-and-burlap banners.  But I am distressed by the gender binary which is presented by this contrast of women’s approach to liturgical style and men’s approach.  Is there not neither Jew nor Greek, male nor female, in Christ?  Is not altar serving a ministry, specifically, for the lay faithful?  Who are we to say that half of the lay faithful (e.g., the female half) has bad liturgical taste?  Or, even more painfully, that young girls exist as mere distractions to building up calls for vocations among our young boys?

I am perhaps contemplating the role of girls in parish ministry because I am expecting my first baby, my daughter, to arrive any day now.  I am wondering what her response to the Church’s call to missionary discipleship will be—and if she will spend any time sobbing in our living room, wondering if she might be good enough for service.  I am hopeful that my husband and I can encourage her to do good work for the house of God—and that being a lay female does not prevent her from doing so.