Yet there might be other ways of addressing the question of what it means to “look like a Catholic Church.” One way would be to follow the architectural principle that “form follows function.” This does not mean, as some modernist ideologues and those opposed to them seemed to think, that a building should be nakedly functionalist, stripped of anything that is not functional in the most pedestrian sense. But it does mean that the form a building takes should facilitate its purpose.

But fostering devotional affectivity, while important, is not the main function of a Catholic church. Providing a place for the celebration of the liturgy—whether the Eucharistic liturgy, the Liturgy of the Hours, or the other Rites of the Church—is its main function. So “looking like a Catholic Church” should mean, primarily but not exclusively, “looking like a place in which the Church’s liturgy can be well celebrated.”

Fr. Longenecker alludes to this when he writes:

although our new church is built in a Romanesque style, it is not simply a throwback to a pre-Vatican II age. The seating is planned around a central altar with good acoustics and sight lines to aid full participation of the laity in worship.

This is all to the good. However, though I do not know if the images and plans I have found for the church online represent its intended final form, I do wonder if in some cases a disjunction between what the average person means by “looking like a Catholic church” and what the liturgy requires has not led to some unfortunate choices. For example, the sketches of the baptismal area seems to show a font that looks like what the average Catholic who grew up in a church built before 1970 would expect, but which seems incapable of accommodating the practice of full immersion, which seems to be the preferred form in the baptismal rite (an example of the ressourcement to which Fr. Longenecker appeals) and should at the very least be possible for those who desire it. 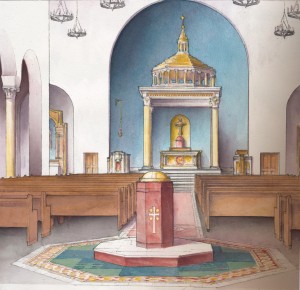 Likewise, the plans seem to show both an ambo and a pulpit, but no obvious place for the presider’s chair: 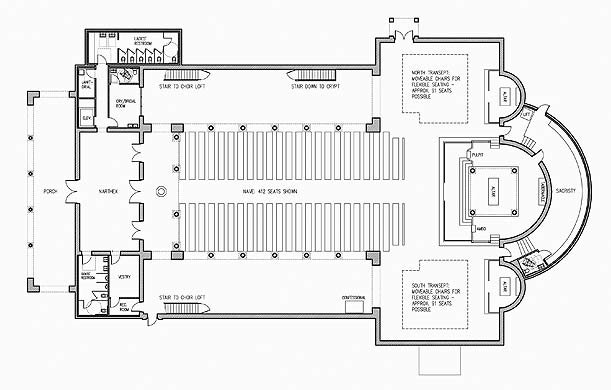 As far as I can tell, the liturgy does not call for a separate pulpit for preaching, and given the way that the homily is integrated into the liturgy of the word one might well argue that the word should be preached from the same place it has been proclaimed. Likewise, the liturgy seems to presume that the chair from which the celebrant presides over the liturgy of the word should be integral to the design of the building, not tucked away somewhere as an afterthought. Also, the plans seem to show little thought being given to such things as providing a place for rites such as scrutinies of celebrations of the Hours, with only a small area in front of the altar where these might take place (one weakness of the “average Catholic” understanding of “looking like a Catholic church” is that it is focused almost entirely on the celebration of Mass and pays little attention of other liturgies).

Which is all to say that while the new church for Fr. Longenecker’s parish “looks like a Catholic church” in the sense of what your average Catholic expects a church to look like (and this is a genuine and important sense), it is not clear to me that it entirely succeeds in looking like a Catholic church in another (and I would argue more important) sense: that of having a form adapted to the demands of the liturgy. I personally don’t think these two senses of looking like a Catholic Church need to be at odds with each other. But, from a distance at least, it seems that Fr. Longenecker’s new church has opted for the first sense of “looking Catholic” over the second.