Having arrive that morning on an overnight flight from the US, I was privileged on the eve of Gaudete Sunday to join in the installation of the new Archbishop of Mechelen-Brussels, Jozef De Kesel (I have a friend who works for one of the auxilliary bishops, who got my name on a list that allowed me to get through the security).

The celebration was held in Mechelen in St. Rumbold’s Cathedral, which was built over the course of the 13th-15th centuries. The cathedral is not that large and was standing room only. While processing in with my fellow deacons, I was struck by the lack of young people in the congregation, but afterwards some friends commented that the crowd was younger than is typical at Flemish Masses, no doubt due to the presence of a large number of people from the relatively more vibrant Wallonian church. I guess these things are a matter of perspective.

As is often the case with public events in Belgium, one of the most interesting aspects of the Mass was the linguistic one. The main languages were Flemish, French, and Latin, with dashes of German (the third official language of Belgium—a fact that many Belgians themselves are not aware of), Italian, Spanish, and English thrown in as well. I was sitting among the clergy and so was not entirely shocked by the robust singing of the Latin Ordinary, but my friends in the congregation also commented on the strong vocal participation of those arounds them (again attributed to the presence of the Wallonians). I didn’t get the feeling that the use of Latin was itself an ideological statement, as it sometimes is in America, but rather truly served as a linguistic neutral territory in a country where what language gets used when is often a fraught issue.

Though suffering from jet-lag, I was able to get the gist of the homily, which was given in Flemish and French (alternating languages by section and not repeating each part in both languages). It struck me as somewhat “Franciscan” in emphasizing that the heart of the Christian faith is not a philosophy or a moral code, but the person of Jesus Christ (of course, as I pointed out to someone afterward, Pope Benedict said the same thing in Deus Caritas Est). From what I know of the Church in Belgium, it is a good sign that the new Archbishop is stressing the primacy of Christ, since various moralistic forms of Catholicism—whether of the right-wing sort prior to the Council or the left-wing sort after the Council—have not served the needs of the Belgian Church very well. 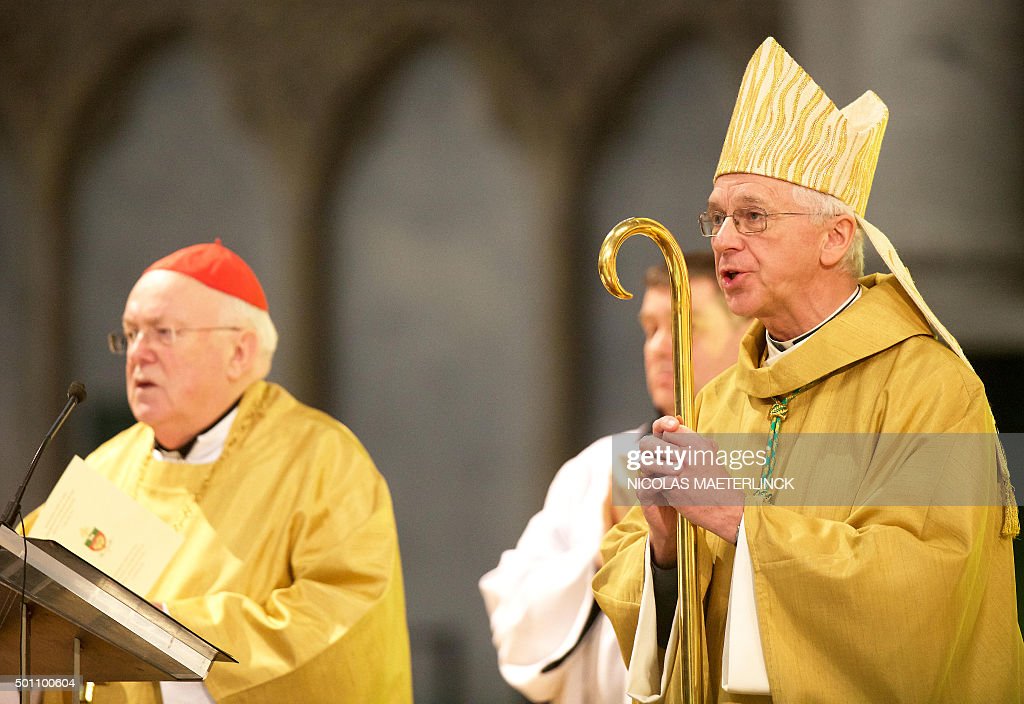 Belgium is famous for its liturgical vestments, and I was struck by the extreme simplicity, but fine quality, of the vestments worn. While the priests had matching chasubles, we deacons were left to fend for ourselves, vestment-wise.

I noticed that Belgian deacons tend to favor Byzantine-style stoles, a trend that has not yet hit American deacons.

The liturgy was both joyful and solemn, with a fidelity to rubrics and texts that has not been typical of my experience of liturgy in Flanders. One quibble: no one seemed to have given any thought to giving communion to the deacons (who are significantly less common in Belgium than in the US), so we were left to troop up to the altar after the priests to self-communicate like concelebrants. Oh well, it is part of the liturgical spirituality of deacons to revel in being be overlooked.