In my first year as a graduate student, I had arranged a meeting with one of my professors. As I sat down in the professor’s office, I observed that, among the usual swaths of books, a beautiful picture hung near the desk: an icon, with a lady dressed in red, a piercing gaze and a pointing finger, pointing to a bright orb of an egg. I was a fan of Catholic Kitsch, but this was the weirdest picture I had seen. Who was she? The patron saint of chickens? Some 10th century mystic doing some mystic thing? In an unguarded moment of blunt ignorance, I blurted out, “Who’s that lady with the egg?” My teacher looked at me, and with a patient voice, informed me that “That ‘Lady with the Egg’ is Mary Magdalene.” 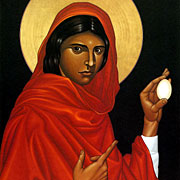 The image which I had seen, of Mary of Magdala holding a brilliant egg, points us to the tradition of hagiography in the Eastern Churches surrounding Mary Magdalene. According to tradition described by, for example, Greek Orthodox Christians, Mary of Magdala not only was an “apostle to the apostles,” but served as a witness in the wider early-Christian world, travelling as far as Rome. In Rome, she confronted the emperor himself, Tiberius Caesar, to inform him that Jesus had been wrongfully put to death under Roman watch. But, Mary told him, the tomb of this dead man was empty: “I have seen the Lord, Christ is Risen,” she proclaimed, the same words she had spoken to the apostles. The emperor scoffed: “It is impossible—just as impossible that an egg could turn from white to red.” Rising to the challenge, Mary presented him with a miracle—she reached for an egg and held it up—the gleaming white egg slowly turned to bright red, as red as the sun. That miraculous, round, red, stone-shaped egg reminds us of another stone which showed us a miracle—a stone which was rolled away to reveal an empty tomb.

The tradition of dying Easter eggs red has been linked to this story of Mary Magdalene’s witness to the world, as has the icon which depicts Mary Magdalene confidently pointing to that small, surprising egg. This particular image is something of a contrast to some common Western images of Mary Magdalene, which more often represent Mary as one of the myrrh-bearing women, ready to anoint the body of Jesus, or, show her in the midst of her dramatic encounter with the risen Lord in the garden on Easter day. Sometimes, Mary is conflated with another myrrh-bearing woman, the one who broke an alabaster jar and poured it on Jesus’ feet (e.g, Mark 14:3). This conflation, of course, is about as bad as conflating John the Baptist with the Disciple John (the brother of James), but that’s another story!

What do these various depictions of Mary Magdalene teach us? Aside from the Gospel text appropriate for Mary Magdalene (John 20:1-2, 11-18), the texts from the Roman Missal for the Memorial of St. Mary Magdalene offer five beautiful moments in which Mary’s discipleship and relationship with the living God are brought before us. Interestingly, each of these images—the anointing with myrrh, the encounter in the garden, and her public witness—are brought before us in these texts:

The “Prayer over the Offerings” describes Mary’s “homage of charity,” connecting our offerings to the offering she brought to the Lord, burying the dead by anointing His body. The “Prayer after Communion” brings us to the garden, describing how Mary “clung resolutely to her Master” evoking her desire to hold on to Christ, but also Christ’s call to let go, and go forth. Finally, Mary Magdalene’s roll as witness is reflected three times: she is our first witness to Christ, an example which calls us also to announce “the great joy of the Resurrection” (Collect), proclaiming that we have seen “the glory of the risen Christ…his empty tomb” (Gospel Acclamation), and inspiring us to give this news to others: “Go…and tell them: I am going to my Father and your Father, to my God and your God” (Entrance Antiphon).

The hagiographical traditions of the East and West have much to point out to us—showing us more ways to proclaim the Good News, that Christ is Risen, and that the tomb is empty. Even though we risk moments of baring our blunt ignorance as we go wayfaring, let us seek more to know and learn from the Risen Lord and His saints.