This piece on the new missal translation is by Jerry Galipeau at WLP from his fine blog , “Gotta Sing, Gotta Pray.”

Welcome to another installment of “New Translation Tuesday.” 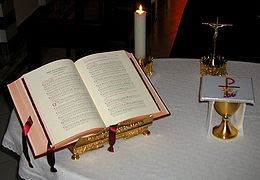 This past Saturday, while waiting in line for refreshments during a break in my presentation to ministers of care at Addolorata Villa here in suburban Chicago, a woman in line with me began to ask some questions about the upcoming translation changes. Her first question: “How do you think the regular people in the pews will react?” I told her that my hopes were that there would be solid preparation and explanation of the changes beforehand so that people would not be caught unaware. She then began to comment about how she thought that people would generally react negatively to the whole thing. She explained that she has been involved in some kind of parish ministry since the early 1970’s. She said that in the past few years she has witnessed a series of backward steps, unravelling the intent of the Second Vatican Council. She mused that this new set of translations is another backward step. 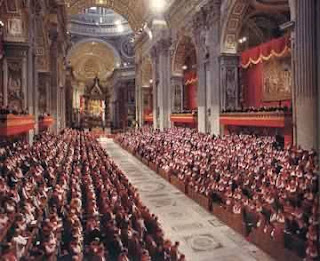 I did not have the time to engage in a conversation about such deep issues. I wanted to ask her what she perceived as the “backward steps.” I could guess that she was talking about the restoration of hierarchical terms in Roman documents and documents we receive from the USCCB. She may have been talking about the tightening of rubrics around the celebration of the Eucharist. She could have been talking about the whole issue of reporting “liturgical abuses.” In a sense, it doesn’t really matter what issues have led her to come to her conclusions. The fact is that she has come to the conclusion that, in her view, there has been a so-called “retrenchment” taking place.

Folks, we have to be prepared not only to implement a new translation of the Missale Romanum. We have to be prepared to engage a person like this woman; a dedicated parish minister whose viewpoints may differ from our own. For her, it’s not just about a translation change; it is something far deeper. She sees the Church going in the wrong direction and sees the new translation as symptomatic of that change. I know there are some who would simply brush her perceptions away; telling her that she is the one who is going in the wrong direction. There are others who would agree with her wholeheartedly; people who would organize picket lines in front of parishes denouncing the new translation and calling for a return to the reforms of the Second Vatican Council. Those of us entrusted with the pastoral care of all of those God entrusts to us have a difficult job ahead of us. We need to care for those who will see this new translation as a move in the wrong direction; we need to care for those who will see this new translation as move in the right direction. And, we will need to care for those whose viewpoint falls somewhere in the middle; these are, I believe, Catholics whose engagement in liturgical matters does not mean as much as perhaps our own engagement does. My great hope is that the new translation will be a time to wake up those who have settled into the great malaise. Perhaps this will be the opportunity to help them engage in what is actually being celebrated week in and week out: the paschal mystery.